Phones without headphone jacks are here… and they’re annoying AF

Jul 23, 2016adminNewsComments Off on Phones without headphone jacks are here… and they’re annoying AF

That’s the response I expect to hear from all the apologists who think that smartphones without headphone jacks are NBD.

I’ll agree to disagree. The headphone jack and loss of it on the devices we use the most is a very big deal. A massive deal. A deal of epic proportions that will have ramifications on not just phones but the entire consumer electronics world.

The 3.5mm headphone jack as we’ve known it for the last 50 years is on the chopping block. Apple is widely expected to ditch the established audio port on this year’s new iPhones, paving way for Lightning port-compatible earbuds and headphones.

In the Android camp, phones like Lenovo’s Moto Z and Moto Z Force and China’s LeEco have already scrapped the 3.5mm headphone jack; to listen to music on the company’s three latest phones, users need to plug in USB Type-C headphones, go wireless, or use a dongle.

Oh, great! Another damn dongle to buy, attach and detach and eventually lose.

“Who wouldn’t want a dozen dongles?” ?

I’m all for letting go of old technologies to push forward, but what is happening is actually going to make things worse.

Another damn dongle to buy, attach and detach and eventually lose.

The headphone jack has worked for 50 years and it can work for another 50 more because it’s universal.

Headphones I plug into my iPhone work in an Android phone, in a BlackBerry, in my computer, in my PS4 controller, in my tablet, in any speaker with audio-out, and so on.

I can walk into any electronics store and pick up a pair of headphones and not have to worry about compatibility with any of my devices. I know it’ll work.

But that’s going to get all f*cked up soon.

The soon-to-be Lightning headphones for Apple’s iOS devices will not work with Android devices that will use USB Type-C headphones and vice versa. And neither of these will work with any of your other devices unless they have a USB Type-C port.

How is that consumer friendly?

Sure, I could get a pair of Bluetooth headphones. But have you ever used them before?

Unless you pick up a pair of Bang & Olfusens or high-end Bose or Bowers & Wilkins or Parrot Ziks, the vast majority of Bluetooth headphones sound terrible and have unreliable, unpredictable connectivity. Not to mention you have to charge them up. I hate charging up accessories.

To be fair, some Bluetooth headphones also offer a wired input, but guess what? They only work with the 3.5mm headphone jack. Tough luck, buddy!

As Mashable’s Product Analyst, I test and review gadgets for a living. I test Apple devices, Android devices, Microsoft devices — all kinds of stuff. I also own many devices made by different companies. 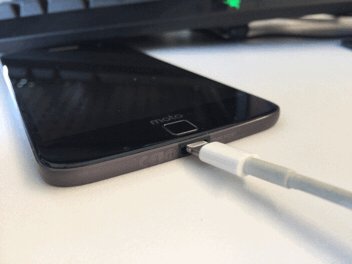 With a universal headphone jack, I never have to worry whether or not the crappy pack-in iPhone EarPods I have will work with the Android phone I’m reviewing or not. I also never have to worry if I’ll be able to plug my headphones into a friend’s phone to listen to some new song. Same applies for when I want to use my earbuds and headphones with another person’s device.

With a universal headphone jack, I never have to worry whether or not the crappy pack-in iPhone EarPods I have will work with the Android phone.

“Just use a dongle and shut up already! Man you’re a baby.”

Dongles also get lost. The easy thing to do is get a dongle for all of your headphones and leave it there. But if you’re switching between devices, you’re going to end up removing the dongle, like I did, and lose it somehow. And you’re asking me to buy dongles for each pair of several pairs of headphones? Get outta here!

In fact, I lost the included dongle that came with the Moto Z by accident days after I started using it.

I knew it would happen: I lost my Moto Z’s headphone jack dongle. Can’t use my backup earbuds bc corner deli doesn’t sell dongles

I know transition periods are painful. It was hard moving from Apple’s 30-pin connector on the iPod and iPhone 4S (and older) to Lightning. I had to buy new docks and new cables. I’m sure Apple and all the accessory makers really raked in the dough then and they’re going to do so again when people have to buy new Lightning headphones.

This breaking of interoperability is a net lose for everyone for years to come.

All of this says nothing about the fact it’s impossible to charge these jack-less phones with battery packs and listen to music at the same time with wired headphones.

Maybe I’ll look back at this one day when the headphone jack is long gone and laugh at how wrong I was, but I just don’t see this being a smooth transition, not with two different port standards vying for your dollar.

At the very least since Lightning is an Apple-only port, Apple should switch to USB Type-C on its iOS devices.

USB Type-C was designed to be an industry standard. If Apple gets behind USB Type-C for its iPhones and iPads (it’s already there on the 12-inch MacBook and is likely going to make its way to new MacBook Pros later this year), the switch will be easier since USB Type-C will be everywhere.

Intel recently joined in favor of killing the aged audio port, too, and replacing it with USB Type-C — not just specifically for smartphones, but for all devices from computers to tablets.

As if it wasn’t already an Apple vs. everyone else world, this “removing the headphone jack” change is only going to divide the camps up even more.

Replacing the headphone jack reminds me of the video format wars fought throughout the years (i.e. VHS vs. Betamax, VCD vs. DVD and Blu-ray vs. HD-DVD).

In every one of those battles, only one emerged victorious to become the physical media format.

The logical bet is on wireless. Bluetooth headphones have improved tremendously in sound, battery life and connectivity within the last five years and will get even better by the end of the decade.

In the meantime, it means dealing with incompatibility issues. Or use dongles. Oh. God. Dongles. There’s nothing worse than being pushed back to move forward.

How to Create Engaging and Attractive UX/UI

The Magento Ecommerce Agency or ecommerce Development Company contributes to the creation and maintenance of websites. In this regard,...